Nov 28, 6:00 pm, Rishikesh.  I watched the newlyweds sitting on the opposite side of the Havan.  They were our co-participants in the rituals, celebrating the beginning of their life together.  We were doing the reverse—bidding farewell to dad’s soul.  I tilted my head towards my left to comfort my wife.  The mask covering her face had turned moist.  Her silent sobs drowned the rumblings of the Sacred Ganges and the stirring chants of the Hanuman Chalisa.  As I felt a rising lump, I turned my head away and my eyes landed on his holiness, Pujashree Chidanand Swami of Parmarth Niketan.  In an instant, my heart was filled with peace.  His mere presence was precious.  Precious for us and for the hundreds of surrounding seekers.  Who can be more precious than one who comforts anyone coming to his abode?  No one, I concluded.

My eyes then rolled over to Swamiji’s right and landed on someone else.  And that image put my conclusion from a moment ago to test…

My first interaction with one of India’s most reputed corporate houses, The Bajaj Group, goes back a decade.  I have the good fortune to call Sanjiv Bajaj a dear friend, someone who I have mused on in a previous work of writing.  However, when it came to the family’s elder scion, Rajiv, at the helm of the group’s prize jewel – Bajaj Auto – my exchanges were limited to formal greetings at rare social events.  With a few common friends, my awareness of Rajiv was confined to his media portrayals as one of the most accomplished and vocal leaders of our country.  But this story is not another attempt to elegantly chronicle Rajiv’s leadership traits.  Instead, this story is about my own quest of preciousness.

Fast Rewind.  Rajiv’s kid was my son’s classmate.  My first rendezvous with Rajiv’s public facade was on the Annual Day at St. Mary’s School several years ago.  I proudly sat in the second row of the reserved section, flanked by the school’s staff – courtesy my wife who was the elocution teacher in the same school.  Rajiv, on the other hand, sat alone.  He was the Chief Guest on the pedestal.  I don’t remember the exact contents.  All I recall was that he spoke passionately about homeopathy and its concepts of harnessing our inner strength.  And somehow, he related it to value-based upbringing for kids.  It was an unusual Annual Day speech.

My second exposure to Rajiv was in a different setting, though our relative coordinates were similar.  About seven years ago, I was in Goa as a participant at YPO’s (Young President’s Organization) annual retreat, rubbing shoulders with the who’s who of the Indian corporate world.  And there was Rajiv, on the podium again, as the keynote speaker.  Only this time, he chose to speak about yoga and the business lesson one could derive from its practice.  Once again I was amazed at how he connected the balancing postures of yoga with the art of corporate decision making.

My third public exposure to Rajiv occurred during the early days of COVID-19 when I would frequently see him on national news channels.  He was a pro in front of the camera, unagitated yet forceful.  In each appearance, his message was identical, “Lockdowns don’t work.  They don’t flatten the pandemic curve, they flatten the GDP curve that our country can ill-afford.”  His demeanor was fearless and he was unfazed that his outspokenness put him on a direct collision course with powerful political establishments.  His style instantly divided his vast audience into two groups—hero for some, villain for others.

Earlier this year.  As the pandemic gathered momentum, it changed many things.  One of them was our relationships.  The geographically close ones became closer, the distant ones grew distant.  And in one place, new associations were born in a small ‘quarantine’ groups.  These were the neighbors you would meet repeatedly in a bubble.  Ritu and I got enlisted in one such bubble by a common friend.  Rajiv and his wife Deepa happened to be in the same bubble.  My first assessment was inconclusive. On one hand, I was distracted by the man turning up for dinner in an unbranded disposition—baggy track pants, collarless tee, white flip flops, salt and pepper stubble, and no wristwatch—a sharp contrast for someone symbolizing the top end of our planet’s wealth chain.  On the other hand, I was astounded by the depth of his knowledge, diversity of his experience, memory, and an uncanny ability to turn the most mundane occurrences into thrilling narratives.  His storytelling mastery dispelled the dampness and gloominess of the COVID-19 environment.  This never-before-seen personality of his left me puzzled. 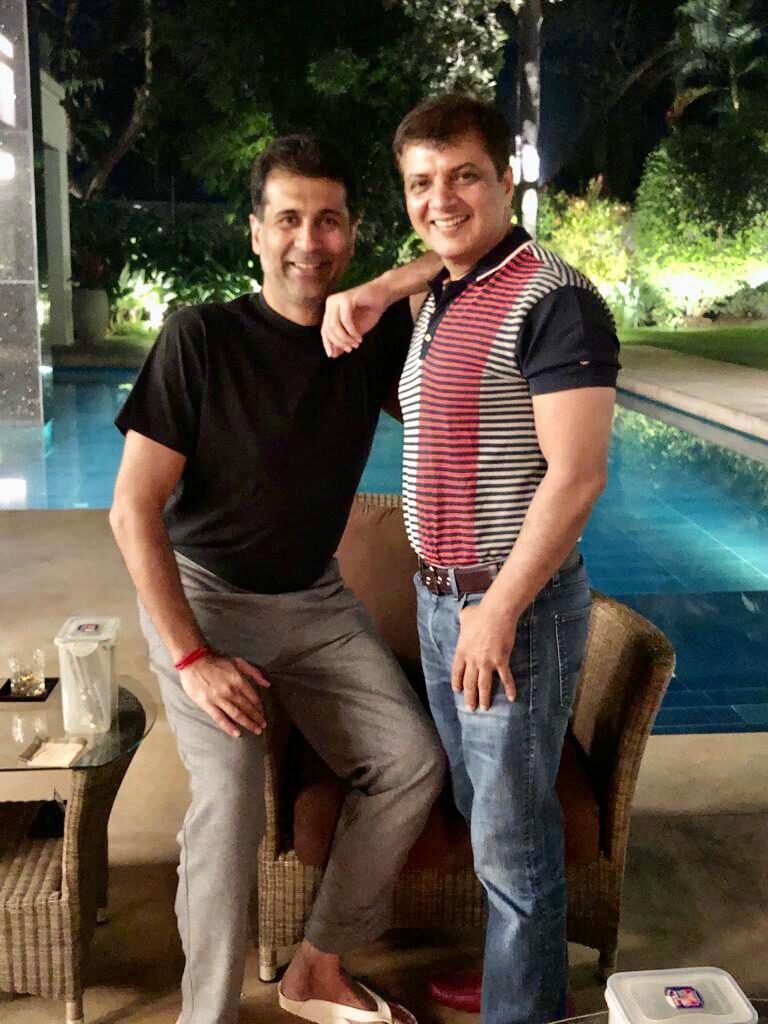 Then with each passing ‘quarantine’ dinner, I began to decipher the puzzle, the doctrine that governed Rajiv’s approach to life—what appears to the naked eye is unimportant, for the consequential stuff resides in the hidden core.  As the maze cleared, I was able to connect the dots—homeopathic talks, yoga speeches, TV tirades—none of his parleys were random manifestations.  Instead, they were connected with an umbilical cord to Rajiv’s belief ecosystem—address the root cause, not the symptom.  “Everything is inside us, Arun,” he once told me over WhatsApp.  “There is nothing out there.”  It all added up.  I now understood why Rajiv was so conspicuously missing in social and corporate circuits.  That’s because he was a self-sufficient man, ‘relationship transactions’ didn’t excite him.  Then sudden turn of events messed up the puzzle I thought I had solved.

Hand of Fate.  On June 3rd, Ritu lost her dad to COVID-19 in a heart-wrenching way.  Her inability to meet her lonely dad at a time he needed his only child the most, left her devastated.  With no goodbye rituals, she spiraled down rapidly.  That’s when, even as old friends and family stood steadfast, a surprising pillar of support emerged from an unexpected quarter.  Rajiv, whom we barely knew and someone who I had mentally labeled as an emotional-recluse, started visiting us frequently along with his wife to console and divert Ritu’s and my mother-in-law’s minds.  Our WhatsApp had started buzzing with his messages – discourses on dealing with grief, the circle of life, and meditation techniques.  Everywhere he would travel, he would make it a point to bring back some local delicacy for the family.  This was a very different side of Rajiv, gentle and sensitive, vastly different from the brazen (sometimes cheeky) spokesperson on TV that the world is accustomed to watching.

With time and everyone’s all-round support, Ritu slowly but steadily healed.  However, the vacuum still stayed—the sinking emptiness one experiences when closure has been denied.

Back to 6 pm by the Ganges.  My gaze slid from the saffron-robed Swamiji to the black-clad man.  Rajiv was in a strange place—a public setting without TV cameras—participating in rituals with sadhus that I suspect didn’t do much for him.  And yet here he was, clapping his hands in devotion during the Ganga Aarti at Parmarth Niketan of Rishikesh.  A custodian role perfected to provide comfort to a grieving daughter—from hosting our travel to Rishikesh, arranging a special Havan, an evening aarti by the Ganges, a tour of the ashram, an audience with Swamiji, and specially curated hymns and prayers to appease dad’s soul.  Ritu had her closure and I had my revelation—’those who are in touch with the Self are the ones who can touch others’. 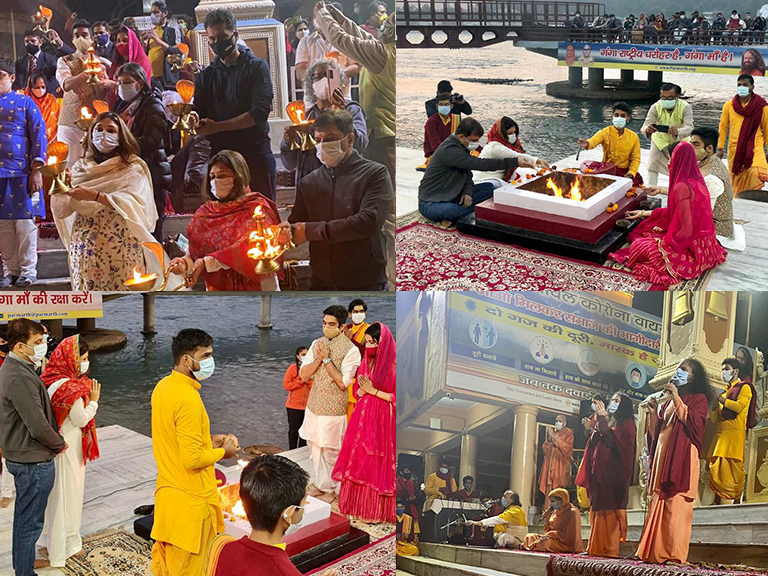 My quest for preciousness was complete.  Whose presence is more precious?  The one you have come for?  Or the one who has come for you?  My answer was as clear as the Himalayan Ganges gushing next to me.  You see, sometimes in life we travel great distances in search of people/places to seek solace, only to discover that the answer always resided next to us – in one who walked alongside during the most crucial steps of our journey…