“Remember, when I laid in despair in the hospital?” I asked him. “What did you tell me? ‘Keep telling yourself “I am Fine”, and you will be fine!’ Your advice did wonders for me. It will work for you as well, Daddy.”

I reminded him of the words that he had spoken to me from his wheelchair as I laid helpless in my hospital bed last year with an amoebic liver abscess. I was fighting back my tears. I didn’t need to because he couldn’t see me. Did my words carry the impact? I don’t know. As I couldn’t see him either. He was on the other side of the call, his voice inaudible. Perhaps, he was prioritizing to conserve his breath. I would never know as it was the last I spoke to him. Two days later, he travelled to the other side. `Alone in the final leg of his journey. How I wish I could have held the hand that had blessed me for decades for just a moment before letting go. Unfortunately, that’s not how COVID-19 operates. Fortunately, the virus can only dictate how you die, not how you lived. The closure of Dad’s story was preceded by many beautiful chapters. 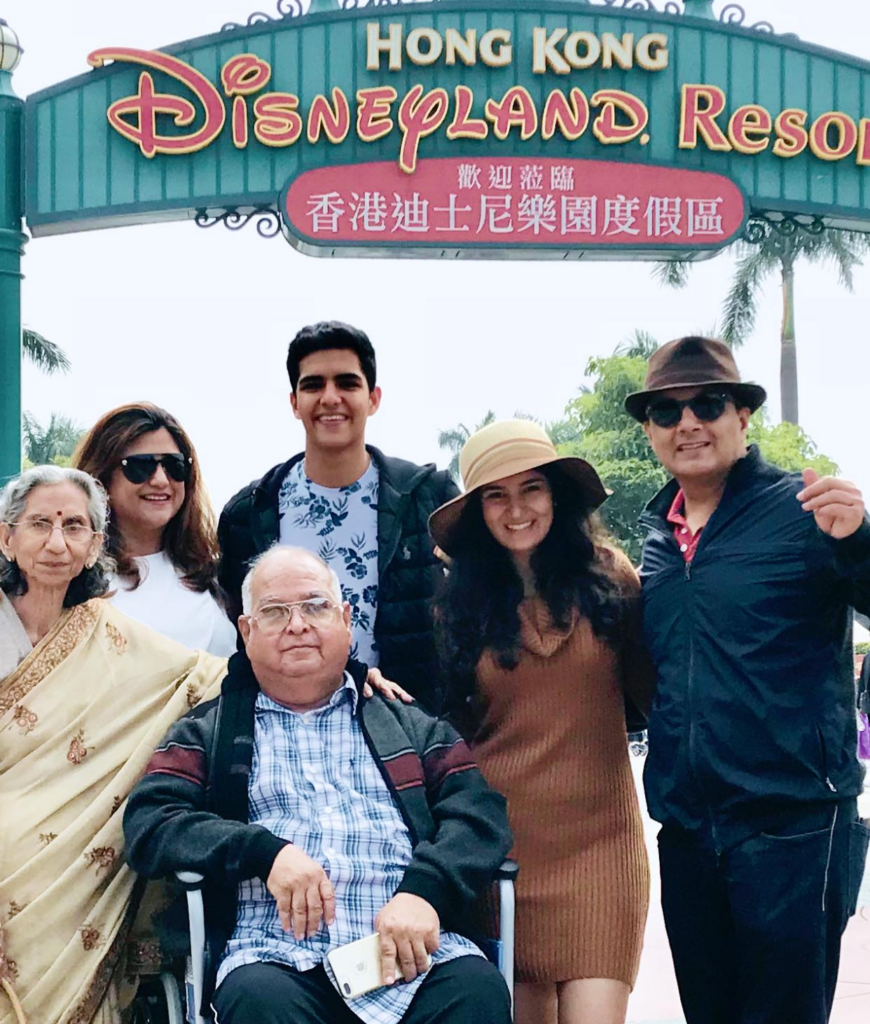 Beginning. I first met him when he was a decade younger than what I am today. I was in my second year of college. His wife’s nephew was my sister’s fiancé. He had come for some official work to my town and had stopped over at our place. I dutifully touched his feet; perhaps, I had a premonition. It was the first baby step of our relationship.

A decade later. I married his only offspring. A typical arranged matrimony that was enthusiastically championed by my sister. While the wedding was in Ahmedabad, he threw a special reception in Pune for all the blue-collar workers of his employer, Sandvik. A few months later, I relocated to Pune. My social life needed a boost and his societal circles proved useful. Dinners at his place became a weekend ritual. Of course, the invitees and context of these dinners differed each time. For instance, dining with an overseas customer was all about displaying the Indian hospitality while having a boss over was about showing the hierarchical respect. Someday, a colleague would stop over to bond while on another day, a subordinate would be welcomed for an encouraging pep talk. Every now and then, an aged, distant relative would be invited out of a sense of duty whereas a far-flung nephew would be summoned to dispatch the local guardian responsibilities.

And somewhere in between the laughter and cheer of our whiskey pegs, our relationship grew and I made a transition from Son-in-law to Son.

After another decade. Years flew by until one fine day he discovered that he had reached retirement age. Scary ripples spread through the family—what will a person with wheels beneath his feet sit at home and do? The fears were ill-founded. It was academia this time around; he became a professor at Sinhgad Institute of Management. The transition from the corporate rat race to educational institutions was seamless. Associate professors took over the role of corporate colleagues while the blue-collar workers were replaced by management students. The students didn’t just attend his classes, but they were often found in his living room for a variety of counselling sessions. Once a young couple even came to him for “eloping” assistance in defiance of their unreasonable parents!

His professional escapades didn’t come at the cost of his loved ones. Birthdays, anniversaries, and get-togethers on every side of the family were incomplete without his humour. The last prayer in each festival was reserved for his hymns. He doted over his grandkids, swelled with pride over Cybage’s ascend, and lent me his shoulder when I lost my own dad.

Yet another decade. Years kept sweeping by. Then arrived the age of the Mayan prophecy the year our planet was expected to come to a grinding halt. But, 2012 came and went and fortunately, the world didn’t stop. Unfortunately, one of its inhabitants did. For the person who ran all the time could, suddenly, no longer walk. Vasculitic Peripheral Neuropathy, they called it. Something you won’t hear in conversations over a coffee table. It is the rarest of rare diseases that leads to a gradual degeneration of nerves. There is no solution to it. Only exemplary medical attention to mitigate the pain and delay the onslaught of disease coupled with tons of emotional support for positivity.

Mom became the caregiver, no degree of words or salutations can capture her commitment. But, when it came to positivity, he didn’t need any help. In no time he joined Ruby Hall’s physiotherapy department and was back to his zestful best with his new morning circle. He was a star celebrating all special occasions where he would bring cakes, samosas, wada pavs—everything unimaginably sinful for the staff members. “I will come here till the last day of my life,” he often declared.

The curtains. His health kept deteriorating with each passing year. Hospital visits increased in frequency every few weeks—immunosuppressant drips to stop nerve degeneration, to control sepsis or pneumonia or diabetes, and zillion bacterial fevers.

Then came the lockdown. We strongly admonished him to stay put at home. He tried to follow it regimentally. Since house visits by his daughter’s family converted into FaceTime calls and no physiotherapy outings—as a person who spent 20 hours on bed daily, it was natural for him to feel suffocated. So, he made only two exceptions. 1) His part-time caretaker whom he was completely dependent on for the last eight years continued coming every morning to help him with his morning chores; and 2) His driver took him out every morning for a 30-minute rejuvenating drive that left him stimulated for the rest of the day despite not stepping out of the car. And somewhere in those tiny windows of exposure, the virus found its way to him. Ironically, everyone close to him, including mom, tested negative.

June 3, 2020, 12:30pm. Dad breathed his last. It was a cheerless last breath. The man who spent a lifetime loving and interacting with everyone around, spent his last week in solitude. What’s more, he was not allowed to come home for a proper farewell. So, Ritu and I went to the Ruby Hall mortuary. We had no ritualistic role to play other than waiting for the PMC ambulance.

Then something divine transpired. As fate would have it, the mortuary was right next to the physiotherapy department. The staff seated us and together we waited for the PMC van. Those 30 minutes were precious, we learnt of beautiful tiny incidents that Dad never narrated to us. Tears were flowing down. The few steady ones hastily arranged Agarbatis and Pooja ki Thali. Geeta bhajans resonated on someone’s mobile. The PMC ambulance finally arrived and he came out of the morgue. Everyone, including us, bid farewell from 10 feet away. Dad had his closure—a final goodbye straight from the Physiotherapy department that he so loved.

Obituary. I lost someone treasured to COVID-19. But, I am not holding any grudge. For I know the virus that the whole world fears was only an excuse. The truth is that Dad was living a borrowed life for many years. He was 77 and overweight because of heavy steroids that had led to water retention, wheelchair bound, had a plethora of severe comorbidity issues, the main one being his severely compromised immunity. God just needed a pretext to welcome him, for his circle of life was complete. COVID or no COVID, it was never a question of “if”, it was always a question of “when”.

I believe unless someone close to us has serious comorbid issues, we all need to do our bit to put a stop to this mass hysteria. Social distancing and adequate caution no doubt we must exercise. But, when are we going to cease living in this constant panic? It’s not logical. At least on the Indian subcontinent. It’s simple math. Take Dharavi for instance, the virus entered India’s densest slum on 2nd March 2020 where social distancing is impossible. The slum is 10 times denser than Manhattan. Going by global trends, mortality rates in Dharavi should be peaking now. Yet, today, Asia’s largest slum doesn’t even have 1/100th of per capita mortality rate compared to what Manhattan had at its peak back in early April!

All of us need to make our own choices. I choose not to live in fear. Yes, COVID-19 snatched away someone that I loved from my core in the most heartrending way. But, if I live in constant fear, I would be undermining the indomitable spirit of his unconquered soul. He deserves to be remembered for how he lived and not how he moved on!